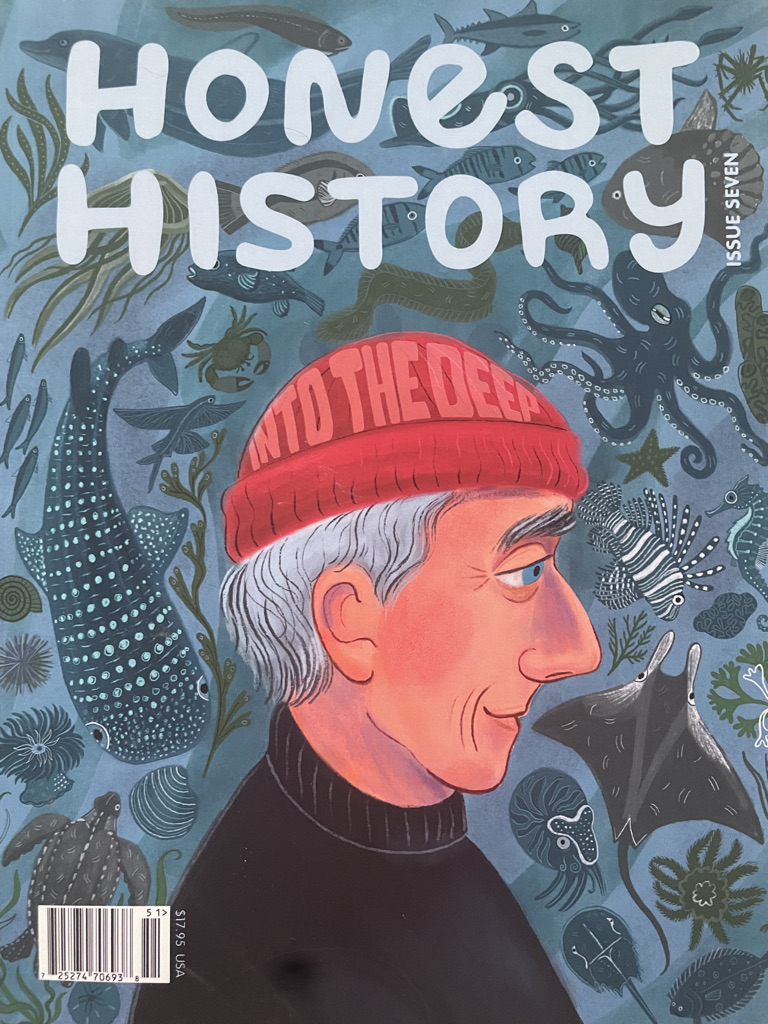 Honest History Issue 7 Into the Deep

Born in france in 1910 always curious about how things worked he learned to read blueprints at a young age and taught himself to build a functioning crane. He saved up his allowance to buy a video camera but when he got home with the camera he took it apart and reassembled it to see how it worked.

Cousteau joined the French Naval Academy and then the Navy three year later. He loved sailing the seas and traveling around the world he had dreams of becoming a Navy pilot but during a car crash in 1936 broke both arms and doctors considered amputation due to an infection that speed through both arms but Cousteau fought the infection and took the long and painful road to recovery to get mobility back in his arms. His treatment was swimming in the Mediterranean Sea everyday to build strength. The daily swims gave him more than mobility back in his arms but also brought back his passion for the water and question what’s beneath the surface. Cousteau and his friends became obsessed with everything related to water   They would have competitions to see who could hold they’re breath the longest and how deep they could go. Cousteau made a special case for his camera to take pictures of things he saw. Cousteau felt setback because he couldn’t stay underwater for as long as he’d like to. He wanted more time underwater so he could observe his surroundings without having to come up for air.  There was equipment for divers to stay underwater for longer periods of time but it was not reliable. The underwater breathing system during that time had constant streak of air to the diver but didn’t account for the fact that the lungs need to inhale and exhale therefor the diver had to turn on and off the tank. His goal was to make a machine that acted like a giant underwater lung.

In 1942 Cousteau became friends with Émile Gagnan the French engineer that worked for a compressed gas company. The two men got to work. They’re goal was to create a device that allowed diver to breathe underwater for long periods of time without having to turn on and off the tank and it needed to be light so it wouldn’t drag the diver to the bottom of the Ocean. A year later the Aqua-Lung was created. It was a small underwater breathing device that allowed divers to dive for up to an hour under while breathing at a normal rate. Within three years the Aqua-Lung was sold to divers all around the world. After time the british renamed the Aqua-Lung to its current name The Self-Contained Underwater Breathing Apparatus or Scuba. Diving was now for everyone and not just those with the strongest lungs.

Cousteau had achieved his goal of staying underwater for more than a few minutes. Cousteau curiosity of what lay beneath it the Ocean’s surface was Increasing. But in 1950 Cousteau had found the ship that would set his career in a new course. The Calypso was an old decommissioned British minesweeper that was used as a ferry. Cousteau bought the ship and quickly transformed it into an Oceanographic research vessel to carry out ocean expeditions. Cousteau brought his whole family along many expeditions making his two sons cabin boys at the ages of 10 and 12. Cousteau used the Calypso to explore anywhere there was water. He used the ship to travel to the farthest corners of the World with hopes of better understanding the Ocean. With all the success’s doing adventure that seemed to follow Cousteau he felt like his discoveries weren’t worthwhile unless he had people to show. Cousteau decided to combine his love for exploring and film by making movies of his discoveries. His goal wasn’t to get famous but to share his discoveries and show the World the underwater treasure trove he come to love.

In 1956 Cousteau released his documentary The Silent World the first film to ever to be shot underwater. The film showed what life was like for crew member of the Calypso and followed along as divers that explored the Ocean and swam with creatures never seen before on film. The documentary was a huge success and even won an Academy Award. Throughout his lifetime Cousteau never shied away from life on camera and used it as an opportunity to teach others what he knew about the Ocean life. For several years he started in the American television series, The Undersea World of Jacques Cousteau which documented his dives, research, discoveries, and life on board the Calypso. He would participate in 115 movies and productions, bringing the ocean up hole and personal to millions of viewers around the world.

Cousteau juggled filming, exploring, writing books, and diving he found that all his work would be for nothing unless there was a way to protect the Ocean. Conversation became a top priority for Cousteau when he realized that future generations would not be able to enjoy the same ocean he observed daily unless there are systems in close to protect the wildlife that called the Ocean home. In 1973 the Cousteau Society was made as a not for profit organization focusing on exploration, protection of endangered species and the education of children and adult about marine conservation.

In the years leading up to his death, Cousteau fought to protect the Ocean.

In his younger years he was known as the “troublemaker” for his curiosity and seemed like a bad thing but it led to a wonderful life.